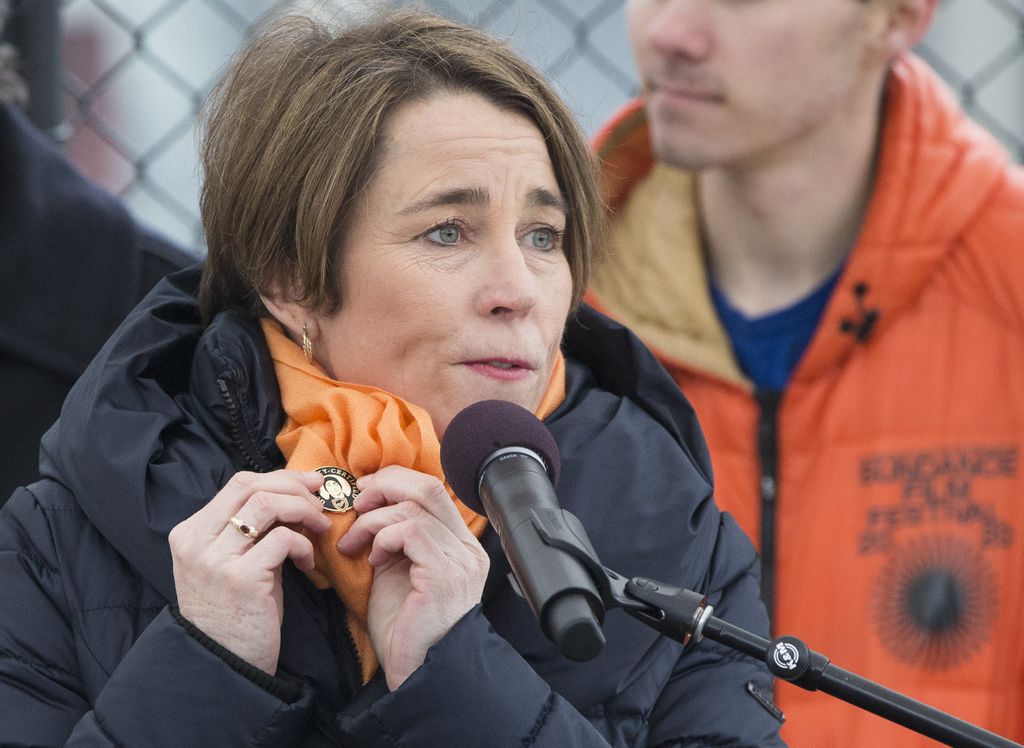 Massachusetts Attorney General Maura Healey held up a pin with the new Gun Safety-Certified logo designed by Manuel and Patricia Oliver, parents of Joaquin Oliver, who was killed in the Parkland mass shooting on Valentine’s Day of 2018, during a press conference on Thursday. Blake Nissen/The Boston Globe

A day before the second anniversary of the mass shooting in Parkland, Florida,, parents of one of the victims, along with survivor David Hogg, came to Boston on Thursday to unveil an initiative aimed at encouraging businesses to support gun safety laws.

The logo that they hope businesses will prominently display features a picture of Joaquin Oliver, who was one of the 17 victims of the Marjory Stoneman Douglas High School shooting. Wrapped around the picture are the words “gun-safety-certified.”

“We should probably be home crying because tomorrow is the second year without being able to hug our beautiful son Joaquin, but instead of that, we decided to move forward and become part of a solution to prevent what happened to Joaquin from happening again,” said Manuel Oliver, his father.

He and his wife, Patricia Oliver, founded Change the Ref, an advocacy organization, in the memory of their son. They spoke during a press conference held with Massachusetts-based Stop Handgun Violence near that group’s billboard at 50 Dalton St. The billboard features the same image of Joaquin.

“I have the perfect answer for all those business owners that keep asking me, ‘How can I help?’” Manuel Oliver said. “Go and become a gun-safety certified corporation.”

The Olivers designed the gun safety-certified symbol, which is based on a picture of Joaquin that Manuel took.

“To make a legit movement of gun safety-certification, I wanted a legit symbol behind it,” he said after the event. “I envision people walking and seeing a coffee shop that has this label in their front window, they same way they could say pet-friendly — right next to it is gun-safety certification.”

The press conference was designed to encourage other states to stricter gun legislation similar to laws in Massachusetts, said John Rosenthal, co-founder of Stop Handgun Violence.

“This is an opportunity for businesses and consumers to replicate [Massachusetts’] successful gun violence prevention model,” he said.

Rosenthal said the initiative will help change the way consumers interact with companies, noting that the majority of Americans favor background checks for gun sales.

Consumers can benefit from the initiative, too, Manuel said.

“When you register as a consumer, you are going to have discounts, coupons, and know who else is certified,” he said. “We are building a whole new wave of economy behind gun safety.”

Attorney General Maura Healey, who spoke at the event, said that over the past few years, she has seen businesses take the lead on several political issues, including immigration, equality, and climate change.

On Monday, President Trump met with several families of victims of the Parkland shooting. The Olivers were not invited.