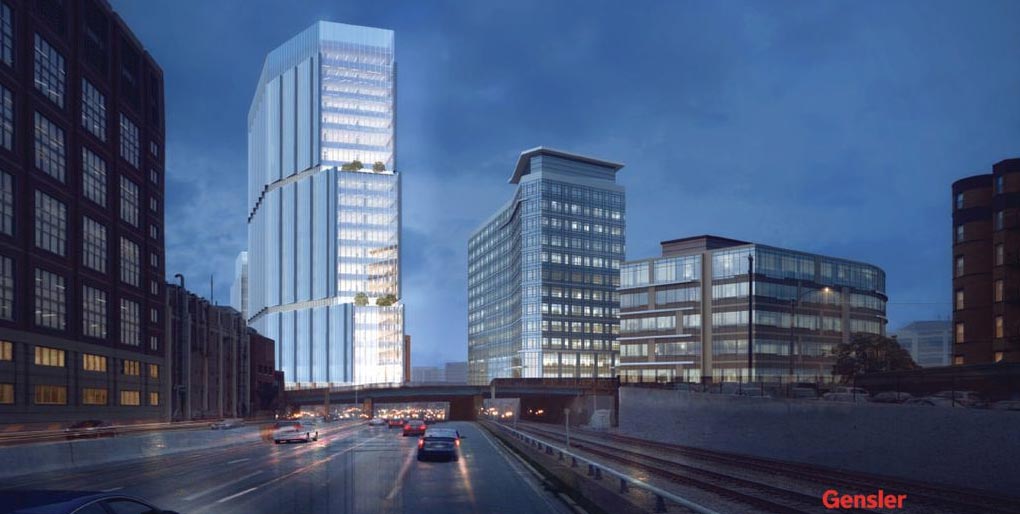 The project’s second phase will require a vast deck above the Mass. Pike, something no one has built since Copley Place opened in the 1980s.Gensler

The second, more complicated phase of the long-planned Fenway Center mega-development above the Massachusetts Turnpike could soon be moving forward, with a new look.

Developer John Rosenthal has filed plans with the city, asking to build office and lab space instead of housing in a 20-story tower that would rise 311 feet above the busy highway. Rosenthal also wants to double to 160 feet the height of a building proposed for along Brookline Avenue.

The shift is a reflection of the ever-growing demand for life science offices and labs outside of Kendall Square in Cambridge, where space is precious and prices are exorbitant. Increasingly, Boston neighborhoods from Allston to the Seaport are attracting biotech development.

Fenway Center, just blocks from Longwood Medical Area, is another place that probably will appeal to life sciences companies, Rosenthal wrote in his proposal. He’s partnering with California-based developer Creative Science Properties to build the project.

All told, the proposed changes would add 218,000 square feet to the project, bringing it to more than 1 million square feet across four buildings. It would also eliminate 500 spaces from the project’s garage, trimming the amount of parking to 790 spaces.

But it will come at the cost of about 150 housing units, which had been included in previously approved versions of the project. Fenway Center would be the latest in a string of projects around the city that have reduced or eliminated housing in recent months to make way for more office space, even as the Walsh administration continues its push to add 69,000 new units by 2030.

Fenway Center, however, will still include a substantial amount of housing.

Its first phase — two apartment buildings totaling 312 units — is nearly done and set to open next spring. Situated on land along Beacon Street, it was considered easier to build than the larger second phase, which will require a vast deck above the Mass. Pike, something no one has successfully built since Copley Place opened in the 1980s. After years spent trying to make those ambitious plans a reality, Rosenthal and his development partner, Gerding Edlen, persuaded state transportation officials to let them split the project in two, with profits from phase one helping to finance phase two.

Now Rosenthal appears ready to push ahead on the hard part. If the Boston Planning & Development Agency approves his changes, work could start in 2020.