Hogg, March for Our Lives cofounder and Parkland school shooting survivor, and Rosenthal, cofounder of Stop Handgun Violence, visited the school on Oct. 17 to motivate young people to make their voices heard by voting in the 2022 midterm elections on Nov. 8. 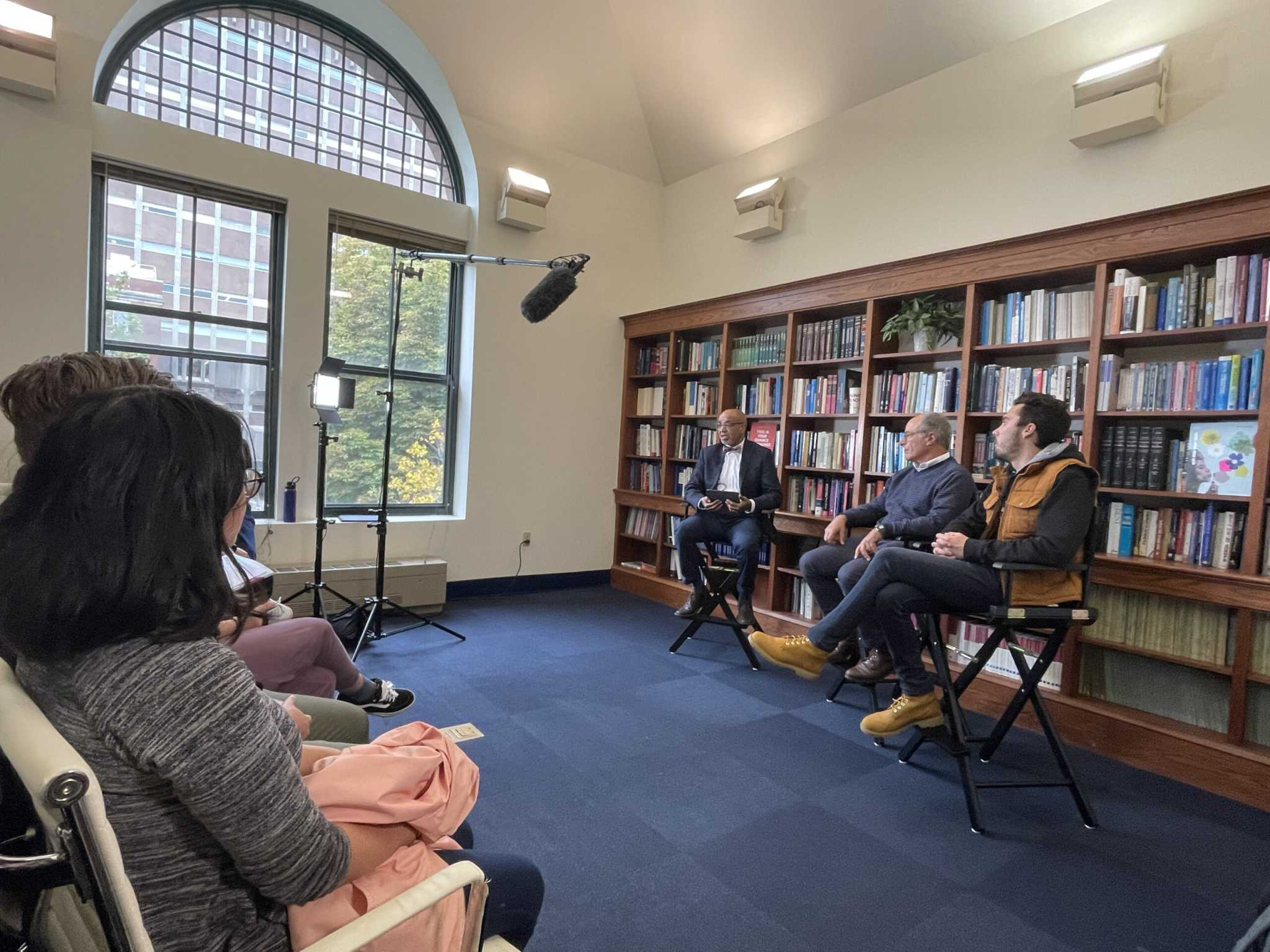 In 2018 and 2020, youth proved to be a formidable force at the ballot box, showing up in record numbers.

In the 2022 midterm elections on November 8, young voters have the power to make their voices heard in massive numbers once again—and determine the fate of key issues at stake across our nation, from climate change to gun violence, said March for Our Lives cofounder David Hogg during a School of Public Health Public Health Conversation on Monday, October 17.

The gun safety activist and Parkland school shooting survivor joined John Rosenthal, cofounder of the nonprofit Stop Handgun Violence, president of Meredith Management, and SPH Dean’s Advisory Board member, for a Public Health Conversation to encourage voter turnout in what may be the most consequential midterm election in US history. Hogg and Rosenthal answered questions throughout the program from a small number of SPH students in attendance with the guests, as well as from moderator Craig Andrade, associate dean for practice and director of the Activist Lab.

Hogg said voting in midterm and primary elections is the “lowest-investment, highest-impact” activity that young people can do to influence public policy and effect real change around the issues that matter most to them, whether that is abortion rights, the economy, the environment, or gun safety.

“Despite what a lot of older people say about us, which is that younger people don’t vote, our generation has voted at a higher level at our age than any generation in American history when they were our age,” said Hogg. “The reason why we got things like student debt cancellation, and the first gun safety bill passed in 30 years, and the most spending ever on stopping climate change, is in large part because young people turned out to vote. We said we care. We care and we will vote you out if you don’t care about us or our future.”

Hogg is partnering with Rosenthal for America Is Calling. Vote!, a nationwide campaign that Rosenthal launched in February 2022 with branding and creative designer Bruce Mau and the Massive Change Network. Geared towards voters ages 18 to 40, the campaign is focused on countering voter suppression efforts by educating voters about their voting rights and the issues on the ballot, with a goal to increase young voter turnout for the midterms. They encouraged people to share their digital ads launching soon across social media, to inform voters about the issues at stake in this election cycle.

“There is a rich history of student movements changing public policy, and we deeply need that now, almost more than ever,” said Rosenthal, who has led Stop Handgun Violence since 1994, successfully advocating for landmark bipartisan legislation around safer gun storage, background checks for private firearms, and assault weapon bans. Massachusetts now has the second-lowest gun death rate in the nation, second only to Hawaii.

“Our democracy is under attack like no time in my lifetime,” Rosenthal said. “Youth showed up in 2020 in a big way, as well as in 2018 after the Parkland shooting, and it changed public policy. If we can motivate youth to come out again, hopefully we can change the trajectory we are on, which—and this is not hyperbole—is autocracy and fascism.”

Hogg acknowledged he has often felt discouraged about the tedious and flawed political process, but he urged voters not to turn political disillusionment into voter apathy.

“It’s true that the Senate is one of the most anti-democratic institutions in this country,” he said. “We live in a country where we let land vote and have more power than people a lot of the time. But if we’re ever going to start to fix something like that and change it, it’s going to require us electing people to that same body that acknowledge that in the first place.”

The conversation also delved into how people can communicate more effectively with family members, friends, or others who hold opposing, or radical, views.

“People are very emotional creatures. Stories change minds, not statistics,” said Hogg, whose advocacy for common-sense gun safety reform since the 2018 mass shooting at his high school has led him to engage with people all over the country, from US legislators and local policymakers, to far-right, anti-gun reform groups and conspiracy theorists.

Instead of feeding into hostility, Hogg says he takes the time to find common ground with people by discussing reasonable facts about the issues they care about.

“I’ve done this a lot even with armed counter protestors that I’ve talked to across the country…while they’re literally wielding the same gun that was used at my high school to murder 17 of my classmates and teachers, screaming that myself and my classmates were all paid actors and we’re fake,” he said. “So a lot of the time it’s about letting people’s emotions speak for themselves, and then meeting it with logic instead of emotion, and understanding that you’re not going to change everybody’s mind.

“We want to work together on what we can agree on—the basics of public health, the fact that nobody wants their kids to die in their school or community, no matter if they’re on the left or right. Nobody wants that.”

Ultimately, our greatest responsibility in a democratic country is to vote and participate, said Rosenthal.

“No vote is a vote,” he said. “We have to exercise our constitutional right that huge forces in this country are trying to prevent—don’t fall for that. Go vote, and get as many people as you can to vote.”

Listen to the full conversation below.