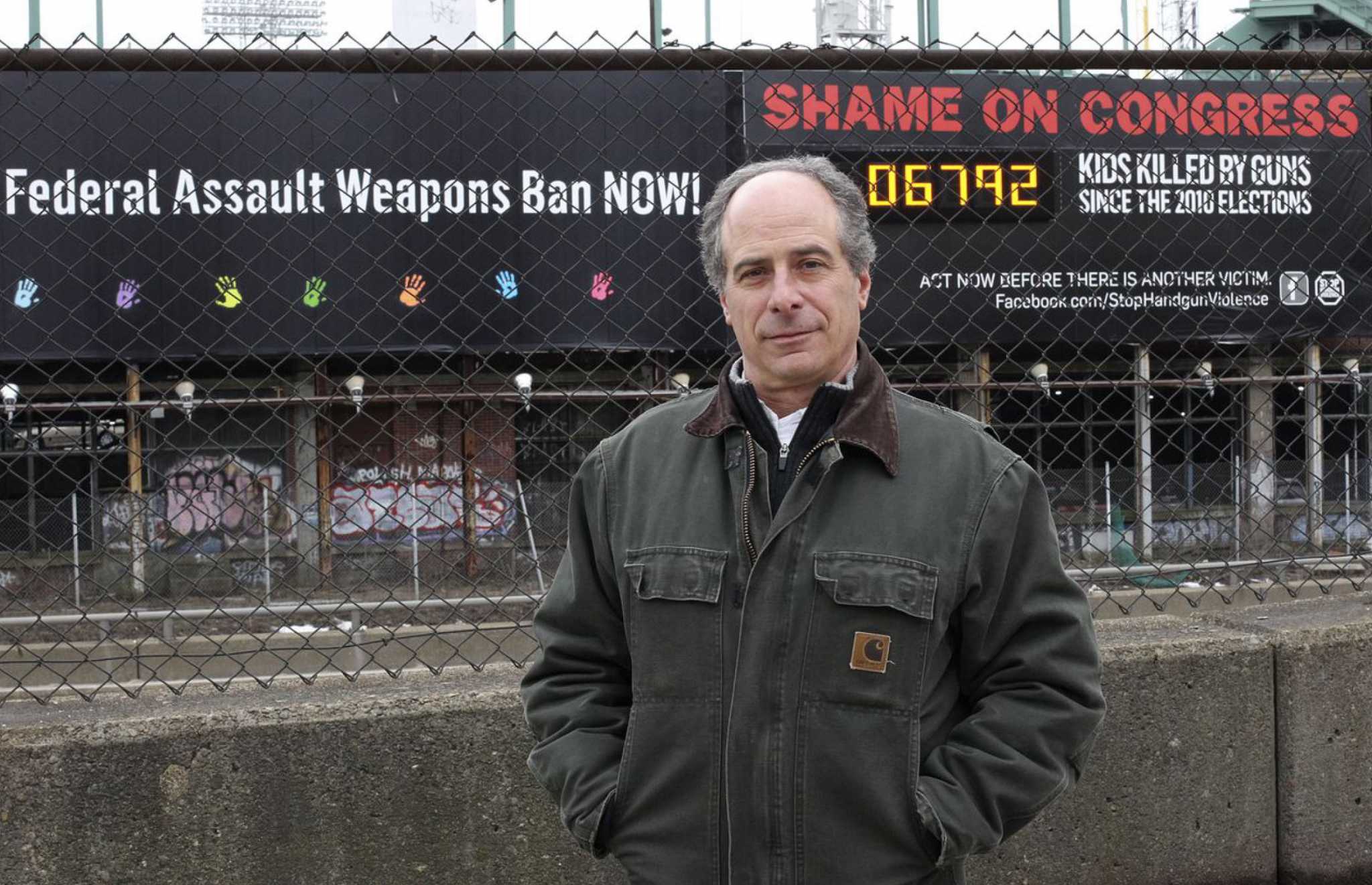 In 2013, John Rosenthal posed in front of the billboard along the Mass. Pike tallying the gun deaths in the state. BILL GREENE/GLOBE STAFF

John Rosenthal has been a hunter longer than he has been a gun control activist. So he has a fascination with what government is, and isn’t, willing to regulate when it comes to weapons.

“When you hunt — and the NRA has no problem with needing a license to hunt — you can have three rounds [of ammunition] for ducks and five rounds for deer,” Rosenthal explained Tuesday. “But when you want to hunt humans, there’s no limit.”

Our nation’s sick devotion to weaponry is front and center once again in the wake of two mass shootings in just one week. They claimed the lives of eight victims in Georgia and 10 more Monday in Boulder, Colo.

Following a mass shooting in 2014, there was a mordant headline in The Onion that summed up our failure to stop these tragedies: ” ‘No Way To Prevent This’ Says Only Nation Where This Regularly Happens.” It wasn’t funny, or intended to be.

President Biden called Tuesday for an assault weapons ban, but the political will to address this deadly issue has been in short supply for ages.

As the head of the advocacy group Stop Handgun Violence, Rosenthal has been at the forefront of sensible gun legislation for nearly 30 years. He was the guy behind the billboard on the Mass. Pike that tallied the lives lost to gun violence.

Like other activists, Rosenthal believes that a culture of mass murder isn’t something we have to live with.

And he believes Massachusetts — which boasts the nation’s lowest rate of gun deaths — offers the proof of that.

“You don’t need an assault weapon or a large-capacity magazine for anything other than killing people,” he said. “Or outgunning cops.” The NRA and its sycophants in government like to pretend that gun control is about taking up all the guns.

While I would be fine with a country without guns, that argument is little more than a scare tactic. Ridding ourselves of this horror — or at least greatly reducing it — can be done through a few steps.
The weapons of mass destruction — the assault weapons and the high-capacity magazines — have to go. Many people have forgotten that several assault weapons actually were banned from 1994 to 2004. They remain illegal in Massachusetts.

Other Massachusetts policies should be adopted elsewhere. Licensing and background checks for gun owners are essential. Here, local police chiefs can refuse licenses to people who have passed background checks when certain other red flags are present.

Finally, gun manufacturers should be held legally responsible for producing weapons that can be used safely.

“None of the things we’ve done cause any inconvenience to responsible gun owners,” Rosenthal said. “But they don’t give unrestricted access to guns to people who can’t pass background checks or who want to kill a lot of people quickly.”

Like many of us, Rosenthal has watched with horror as the mass shootings have mounted, without any meaningful response from government — many calls to action, yes, but little action.

Sandy Hook changed nothing. Parkland changed nothing. The killing of 60 people in Las Vegas in 2017 changed nothing. Despite huge public support for banning weapons of mass destruction and for getting guns out of the hands of people who shouldn’t have them, our so-called leaders shrug.

“Not only has Massachusetts done this, we’ve done it in a bipartisan way,” Rosenthal noted. “Three of our major gun laws were signed by Republican governors. And they didn’t lose their seats.”

The why of America’s permanent epidemic of mass shootings is complicated, and varies. But the how is maddeningly consistent. Killing large numbers of people is simply far too easy in this country.

There is no constitutional right to slaughter other people. But we have a history of being outraged for a while, and then looking away until the next tragedy. We talk a lot about how much we value human life. Ending the carnage would be one way to prove it.